“A modern Southern gothic with a feminist edge and the tense pacing of a thriller…Beautiful and awful, enraging and sad, atmospheric and page-turning: an accomplished novel.”

“An impeccably rendered depiction of the strains of adolescence…Broadly relevant to our present cultural moment…This is a beautifully written, humane, and extremely compelling book.” (Book of the Month pick)

“Compelling, disturbing, haunting. This book reads like the liquid heat of a southern summer—it’s dark and atmospheric, sultry and sensual. Mercy Louis is a basketball star in a conservative Texas town that is bent on controlling young girls and their desire.”

“Past crimes run a dark thread through this coming-of-age fable that calls to mind Laura Lippman’s stand-alone novels and even The Scarlet Letter. Parssinen excels here at capturing the dueling emotions that rule teenage girls’ relationships, and the dire consequences of societal pressures.”

“The solid pacing and strong characters in the author’s second novel…provide a captivating read with the same tension and pleasures of being caught up in a well-matched and high-energy basketball game.”

“A deft and thoughtful novel of feints and dodges about a community brought to its knees by prejudice, disappointments, and a past that can’t be changed.”

“Beautifully written and skillfully crafted, The Unraveling of Mercy Louis is a compelling tale of longing and loss that evocatively examines the harsh realities of female adolescence.”

“A propulsive, soulful novel about heat of all kinds: the sultry oppressiveness of a bayou summer, the searing power of first love and of religious fervor, the sweaty euphoria of sports, the unpredictable crackle of adolescence. Parssinen’s storytelling grabs, her characters haunt.”

“Elegant and gothic, moving and suspenseful, thought-provoking and entertaining, this novel succeeds on myriad levels.”

“Parssinen is an incredible writer and storyteller. . . . She transports you to teenaged life in small town Texas and presents the evangelical and psychic/psychological with nuance and thoughtfulness. . . . Keija’s storytelling grips, while dangling you beyond the precipice of comfort.”

— Ann Imig, Creator & Editor of Listen to Your Mother 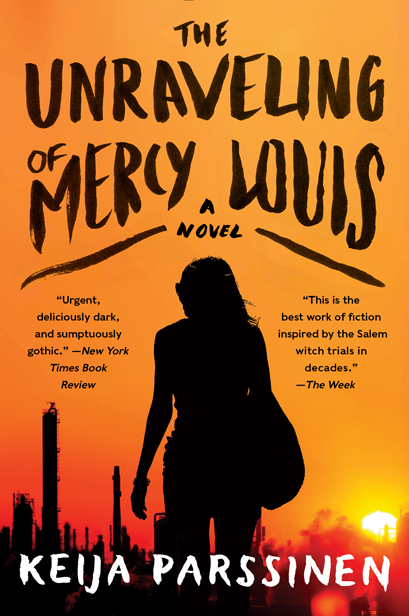 “A rarefied find…deeply unsettling…a thoroughly American story, evocative of a cultural pocket in which sports and church, sex and greed, and tragedy and redemption hold equal weight.”

“Compelling…Blend H.G. Bissinger’s “Friday Night Lights” and Arthur Miller’s “The Crucible” with Laura Moriarty’s “The Center of Everything” and you would have the flavor of this atmospheric book.”

“This is the best work of fiction inspired by the Salem witch trials in decades.”

“A fascinating story…powerful…full of fierce girls.”

— NPR’s To the Best of Our Knowledge

“A lovely, thoughtful, disquieting story of the effects of small-town pressures on a remarkable young woman.”

“One of the best books of 2015…Sumptuous and thoughtful.”

“[It’s] impossible not to fly through this book…the writing is poetry, [there’s] so much suspense.”

“One of my favorite books of the year.”

“Poetically beautiful and deeply moving, this is a book that has it all and should be read by all.”

“The language in Keija Parssinen’s new novel, The Unraveling of Mercy Louis, recalls the sensation of walking into the ocean at low tide, the lush sentences moving around rather than against me. Though the novel explores dark subjects, the quality of her prose feels warm, inviting—a reminder that sometimes beautiful writing can feel like home.”

“The Unraveling of Mercy Louis is absolutely marvelous.”

“Parssinen’s novel is a cry from the heart against the merciless manner in which young women are raised in ultra-conservative communities.”

“It’s a good book when I want to call child-welfare authorities to help a fictional character…Like the best-seller Gone Girl by Gillian Flynn, the ending is not neatly wrapped up with all questions answered. That’s life. There is always uncertainty. Unlike Flynn, Parssinen offers hope that better days lie ahead.”

“The Unraveling of Mercy Louis is a powerful novel that beautifully demonstrates how we grow and change throughout our high school years…Parssinen is an author to keep in our sights.”

“Cinematic from the start…Urgent, deliciously dark and sumptuously gothic…executed with the instinctive elegance of an athletic maneuver. Like the girls on Mercy’s basketball team, who ‘balance so perfectly between control and chaos,’ Parssinen has an intuitive grasp of language’s vital rhythms.”

“I devoured The Unraveling of Mercy Louis. It is everything I hope for in a book: beautifully written, loaded with suspense, and filled with characters I cared deeply about. A great novel that I will be recommending to everyone.”

“Parssinen’s writing is lush, but rarely calls attention to itself, and when it does, it’s well worth the pause…[she] weaves moments of grace and subtle revelation into every character and storyline, adding up to a whole that is ultimately as generous with light as it is with shadow.”

“Keija Parssinen’s novel is a pitch perfect look at where we so often go wrong in raising our girls, using religion as a weapon against female desire. With echoes of Megan Abbott and Stephen King, The Unraveling of Mercy Louis is bravely unsettling.”

“A powerful and profoundly haunting novel–as explosive as a thriller, as wise as a myth, and as chilling as the news. . . . Mercy Louis’s unraveling is conjured with rare insight and deep compassion–readers will find themselves unraveling along with her.”

— Jennifer duBois, author of Cartwheel and A Partial History of Lost Causes

“Writing scenes rich in southern lore and grit, and in keeping with a long line of strong southern female fiction writers– Flannery O’Connor, Eudora Welty, Carson McCullers, and Harper Lee, to name the greats—Keija Parssinen takes her rightful place on a stage whose swamps and droopy trees, big daddies, and virginity balls, have left a lasting impression on the larger landscape of American literature.”

In this intricate novel of psychological suspense, a chilling discovery near the high school ignites a witch-hunt in a Southeast Texas refinery town, unearthing communal and family secrets that threaten the lives of the town’s girls.

In Port Sabine, the air is thick with oil, superstition reigns, and dreams hang on making a winning play. All eyes are on Mercy Louis, the star of the championship girls’ basketball team. Mercy seems destined for greatness, but the road out of town is riddled with obstacles. There is her grandmother, Evelia, a strict evangelical who has visions of an imminent Rapture and sees herself as the keeper of Mercy’s virtue. There are the cryptic letters from Charmaine, the mother who abandoned Mercy at birth. And then there’s Travis, the boy who shakes the foundation of her faith.

At the periphery of Mercy’s world floats team manager Illa Stark, a lonely wallflower whose days are spent caring for a depressed mother crippled in a refinery accident. Like the rest of the town, Illa is spellbound by Mercy’s beauty and talent, but a note discovered in Mercy’s gym locker reveals that her life may not be as perfect as it appears.

The last day of school brings the disturbing discovery, and as summer unfolds and the police investigate, every girl becomes a suspect. When Mercy collapses on the opening night of the season, Evelia prophesies that she is only the first to fall, and soon, other girls are afflicted by the mysterious condition, sending the town into a tailspin, and bringing Illa and Mercy together in an unexpected way.

Evocative and unsettling, The Unraveling of Mercy Louis charts the downfall of one town’s golden girl while exploring the brutality and anxieties of girlhood in America.

The Unraveling of Mercy Louis